Plans to change planning laws in Wales will have considerable ramifications, says architect 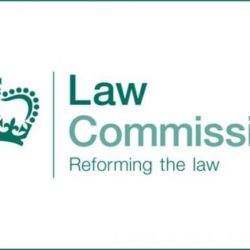 One of the most radical upheavals of Wales’ planning laws will have ramifications for businesses and communities throughout the country, according to architect Doug Hughes of Cardiff and Mid Wales-based Hughes Architects.

A consultation has begun into changes to the legal planning laws and processes in Wales, led by the Law Commission and backed by the Welsh Government.

It includes significant changes to the way planning matters are considered, undertaken and decided by local authorities and organisations such as historic monuments agency, CADW.

Mr Hughes, who is Honorary Secretary of the Royal Society of Architects in Wales, and owns Cardiff and Mid Wales-based planning and building design service businesses, says those outside planning and architecture need to get involved in the consultation.

“The Planning Law in Wales Consultation is a significant document that contains proposals that could have significant ramifications on businesses and communities throughout Wales. This is something that needs to be considered and commented upon by a much wider community than just those directly involved in planning and construction,” he said.

The Law Commission has been asked by the Welsh Government to review current planning laws and to consult on new proposals said to simplify and consolidate current laws.

The consultation, which ends on 1st March 2018, includes a range of significant changes that will impact on everything from small scale home extensions, through to large industrial developments and listed buildings.

“The consultation contains a new framework for planning code that will lead to a planning paper put forward by the Welsh Government.

“There are some good proposals within it that will simplify what are currently a raft of hoops to jump through in order to get planning for what can be simple projects and there also some changes that could potentially make it much more difficult,” said Mr Hughes.

“But it’s vitally important that those outside the building planning and architectural world in Wales consider the ramifications and comment on them as the proposals will impact on everything from small scale home extensions, to the development of business and industrial premises and housing developments.”

Changes are wide and varied, but include abolishing outline planning permission; simplifying listed building consent and plans; requiring permission for all forms of building demolition, no matter what the size or type; a requirement for planning permission when changing the number of dwellings on a development; and tightening enforcement procedures and simplification.

“The consultation is basically suggesting planning applications will be required for more less everything and anything. This is quite significant and could be good in some cases and adverse in others,” said Mr Hughes.

“What’s important is that business groups, community organisations, the agricultural community and others consider the proposals and how they could impact on their area of work. It could have huge ramifications.

“It will regularise the 25 different parts of planning legislation in Wales into a single document. That can only be good. But it’s what’s in the detail and how that could impact on future developments. That is where a much wider audience needs to be informed and consulted.”

The consultation can be found at https://www.lawcom.gov.uk/project/planning-law-in-wales/. 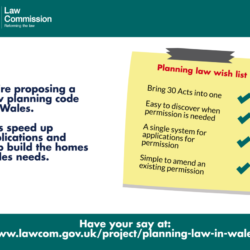