It’s not a house – it’s a treehouse 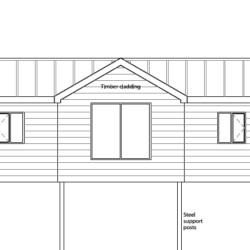 We like to be innovative in our approach to architectural design, so when a client approached us about designing a treehouse we jumped at the chance.

The project involved the design of a structure that would be used as a holiday let within a secluded wood in north Powys, Mid Wales.

Of importance was the need for the design and physical structure to be sensitive to the environment it would be built in.

Ensuring no impact on the natural environment

No trees or other habitats would be removed or affected by the treehouse and its design would mean it is raised off the ground by steel support pipes clad in reflective steel sheets to make them “disappear” from view at ground level.

“It’s always good to work on a novel project like this. It’s not every day you get the chance to design a treehouse, particularly of this type and size.

“The woodland in which the structure would sit is comprised of mature native species trees. It is surrounded by and is open to grazing land, so the woodland floor has been occupied by livestock meaning that it has not grown and developed the fauna seen elsewhere.

No specific back or rear to the treehouse

“The structure doesn’t have a clear front as such because it sits raised within the woodland and with the natural screening of the trees there is no need to have a specific front or back. The access is through a sloping timber walkway from the ground to the raised doorway.”

Materials for the treehouse include walls made of Cedar cladding and a metal box profile roof. The structure would then be raised several feet off the ground by steel support posts which with cladding will appear invisible.

Raised into the canopy with ‘invisible’ supports

“The aim was to create a building that blended in with its surroundings. It also had to be raised to create the effect of being within the wood as a treehouse. By raising it you also create what looks like a floating structure. And this helps it blend into the wood.”

The treehouse comprises of a bedroom, living and dining area with kitchen and bathroom.

Each room looks out from a different side of the treehouse to provide different perspectives of the woodland from within.

Planning approval was granted in October and work will begin on the treehouse in the coming months, providing a new and novel holiday experience in the amazing Mid Wales countryside. 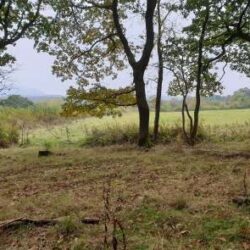