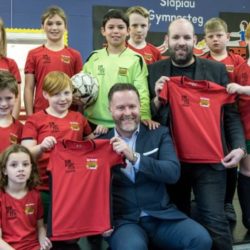 Pupils at a north Powys primary school have received a brand new football strip, thanks to a local architects practice.

The youngsters at Ysgol Gymraeg Y Trallwng in Welshpool will be blazing across the pitch at their next inter schools match with their new football kit as part of sponsorship from building design and planning consultants, Hughes Architects, which has an office in the town.

The school opened in September as the first Welsh-medium primary school in town, located at Red Bank.

“It’s great for the pupils to have a new kit for their games against other local schools and we’d like to thank Doug Hughes and his team at Hughes Architects for sponsoring it,” said Bethan Bleddyn, Headteacher.

Doug Hughes, Principal Architect and Managing Director at Hughes Architects, which has offices at Welshpool, Newtown, Aberystwyth and Cardiff, said: “It’s great to be supporting such a local school, helping the pupils stand out on the pitch in their new kit. We wish them well in their future football events.”