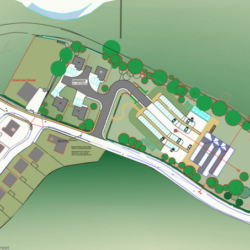 Councillors have given approval to plans for housing and a church on land at Abermule, Powys where a previous application had failed.

Hughes Architects were brought in the by the Dolafon Gospel Hall Trust to come forward with a new design for the church and four houses on land off Kerry Road in the north Powys village.

It followed a previous plan by other planning consultants which had been rejected by planners in 2012.

The team at Hughes Architects created new designs for the church building, ensuring it was aesthetically in keeping with the local community, redesigned the site layout and created plans for four homes planned next to it.

It also included changes to the nearby road, including junction enhancements near to a level crossing on the road and a pavement for residents to use to access the village. Up until now residents have had to walk on the road.

“The plans were sensitive within the community. The Trust’s community has been in the local area for over 100 years but they needed to build a church that would be available to its congregation within Abermule, Llandyssil, Kerry, Hodley and Sarn,” said Doug Hughes, Principal Architect and managing director at Hughes Architects.

“They had acquired the site several years ago and plans put through previously by other planning consultants had been recommended for approval by the Powys planning officer, but were rejected by councillors.”

Part of the planning process on sites of such size also require Pre-Planning Consultantation as part of new Welsh Government planning guidelines.

“We worked with the Trust, its members and the wider community to consider the new plans. We also held a Pre-Planning Consultation which included an exhibition in the village for local residents to attend.

We also hosted a dedicated web page for people to view the plans and submit comments as part of the pre-planning work.”

“We took on board those comments and we’re very happy that the planning application has now been endorsed and approved by Powys County Council’s planning committee.”

He added: “The plans, the safety changes to the highways that were above what was required, as well as community consultation have ensured the plans have been approved and can now proceed with building work.”